The colors, lengths, and shapes of a bird’s wing and tail feathers are variable, but the configuration and positioning are remarkably similar across all species. Familiarizing with a bird’s wing and body feathers is among the most important tools that ornithologists and birders can have when identifying a bird by its appearance.

Learning the feather of a bird’s wing and all bird feather types will enable you to write a good description when you see a bird and enable you to understand someone else’s noted descriptions of the birds they see.

Refers to the wing feathers (Primaries, Secondaries, and tertials).

Primaries: Long flight feathers growing from the hand of a wing. Primaries form the bottom of a folded wing. Most birds have ten primaries, but some sub-oscine passerines have nine.

Secondaries: Long flight feathers growing from the forearm of a wing. The outer Secondary feathers are adjacent to the Primaries. In some ducks, the Secondaries can be brightly colored and form the speculum. The Top Side of a bird’s Wing

Lesser Coverts: Feathers near the leading edge of the wing that overlap the Median Coverts’ bases. These feathers are rarely visible in passerines and are usually concealed by Scapular and Side Feathers when the wing is folded.

Median Coverts: Feathers that overlap the bases of the Greater Coverts. The colored tips of the Median Coverts make the upper wing-bars in some birds.

Greater Coverts: Overlap the bases of the Secondaries. Colored tips of the Greater Coverts often form the lower wing bars in some birds.

Tertials: Refers to the feathers closest to the body and loosely cover the space between the body and the wing.

Alula: Three feathers on the thumb.

Primary Coverts: Cover the base of the Primaries.

The underside of a Bird’s Wing

Greater Primaries Underwing Coverts: Cover the base of the Primaries.

Greater Secondaries Underwing Coverts: Overlap the bases of the Secondaries.

Axillars: Feathers located in the bird’s armpit. These feathers are basically the underwing version of the tertial feathers.

LEARN MORE ABOUT FEATHERS AND PLUMAGES:

A Guide To Bird Feathers 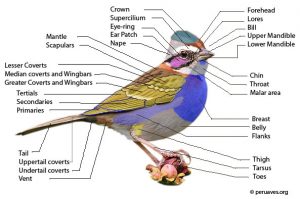 Parts of a Bird: Feather Areas

2 thoughts on “Parts of a Bird: Flight Feathers”